Do you know that gypsum plasters are fire resistant? 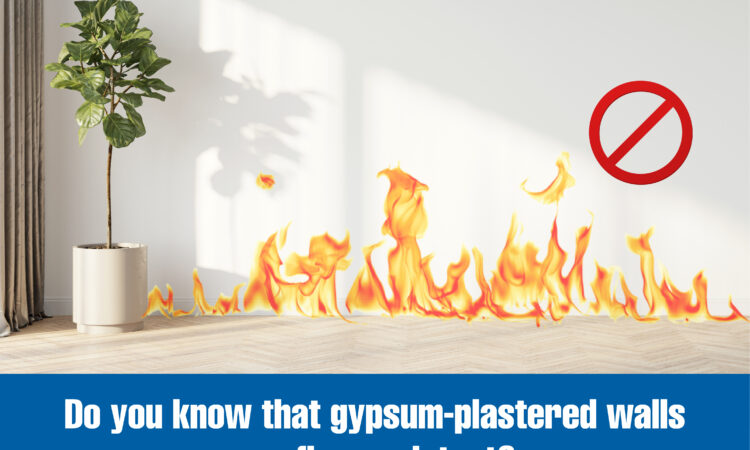 Gypsum plasters are revolutionizing the Indian construction industry. The cost effectiveness of gypsum plasters complemented by a major reduction in resource consumption and maintenance requirements has made gypsum plasters, a mandatory in construction. Gypsum is a miraculous material, and it is almost impossible to find another material with properties similar to gypsum. Of all the benefits that gypsum plasters offer, their ability to withstand fire and offer resistance to fire accidents is notable.

The blog details the chemical composition of gypsum and captures the science behind its ability to offer fire resistance.

What is the chemical composition of gypsum?

Gypsum is a soft sulphate mineral deposited at the thick beds within the layers of sedimentary rock. The chemical composition of gypsum is CaSO4⋅ 2H2O, and the formula is Calcium sulfate dihydrate. It can be seen that Gypsum has 2 moles of crystallized water. Gypsum contains 79% calcium sulphate aong with 21% crystallization water. Or in other words, it contains hydrous calcium sulfate where water makes up to 21% of the molecular weight of gypsum. The presence of water makes gypsum, a non-combustible substance.

When gypsum is heated there is partial or complete dehydration due to the evaportaion of the water present in the gypsum mineral. For hard finishing, the water molecules are let to evaporate completely, or in other words, the molecule is heated to very high temperatures and is completely dehydrated. This is then ground to form a fine powder and is packed in bags of 20-40 kgs for use as plaster. At the construction site, this is then mixed with water to form a thick paste for application. Read more about how is gypsum plaster prepared.

Fire has since times immemorial remained a major threat to people. This has been the case since people started constructing homes and commercial spaces and brought them under cities and towns. Fire remains a major threat for buildings these days, where high-rise buildings, both for residential and commercial purposes have become an important part of our lives. Gypsum that is made of calcium sulfate and dehydrated water is non-combustible and when used in buildings as gypsum plasters, or gypsum boards, it increases the fire resistance of the building. It is due to this reason that gypsum has been commonly used by people to increase the buildings capacity to withstand fire accidents and protect the damage to lives and properties inside the building.

On 2 September 1666, in a bakery located at the Central London caught fire, which in turn spread fiercely to destroy major parts of the medeival city of London. The famous Great fire of London lasted for four days until 6 September 1666, causing losses that were physical, social and economic. This created panic in the minds of Louis XIV, king who ruled Paris, that such a fire incident could damage Paris, akin to what London had experienced. In 1667, the king mandated that the wooden buildings in Paris should be bound with gypsum plaster to make them fire resistant.

Why are fire precautions important?

European gypsum industry presents the importance of undertaking fire precautions for the following reasons and this could be the case with India as well especially due to its rapid urbanization.

In buildings, governments adopt two different ways to suppressing fire and extending the fire resistance of buildings. One is passive mechanisms where it recommends using systems, materials, and modifying the layout such that it can resist fire. Another is active suppression mechanisms to douse fire which happens after the fire has happened. It is about using extinguishing agents, and sprinklers to douse the fire from spreading.

Gypsum plasters are a common passive fire suppression systems and is well known in the construction industry. Gypsum boards and gypsum drywalls add to the fire resistance offered by gypsum plasters. When gypsum plasters are exposed to fire, the heat coming from the fire ignites the crystalline water evaporating it into steam. The heat energy generated from the fire incident is used in this process of evaporation. This continues as long as there is sufficient water in the gypsum plastered wall. Notably, studies reveal that Gypsum plasters remain inert until the temperature during fire accident reaches 1200 degree Celsius. Until then, the crstallized water that is chemically combined with calcium sulphate in gypsum, keeps evaporating gradually. This process is called calcination. Generally, it is caused when gypsum plaster or gypsum boards are continuously exposed to fire for a longer period of time. This process begins at the point of plaster that has caught fire and proceeds until the very end of the gypsum plaster. This continues until there is uncalcined material in the plastered wall. In the beginning this is rapid and spontaneous while this slows down because the thickness of plaster after calcination increases. During this process of calcination of the gypsum plaster, the temperature on the other side of the plaster is low at around 100 degree celsius. This means that as long as there is uncalcined material or to-be-calcined gypsum plaster, the temperature would not exceed 100 degree celsius and the fire progresses at slower speeds.

Even after the entire gypsum plaster is calcinated, the thick layer of plaster that forms during calcination would act as an insulator resisting the spread of fire. This enhances the fire resistance of buildings.

This way, gypsum plasters suppress the progression of fire protecting the buildings, This also means that a major damage can be prevented particularly in crowded areas like apartments and villas where a large number of people are located within close proximity. It is also the case with commercial buildings, educational institutions, hospitals, government buildings, etc. where people throng in large numbers to meet their demands and needs. Slow progression of fire means there would be bandwidth to evacuate people on one hand, and prevent it from spreading to neighbourhood and other buildings in the vicinity, on the other hand.

Looking for a gypsum plastering service?

We have offered gypsum plastering in Chennai, gypsum plastering in Bangalore and to other cities as well. No matter whether you are involved in construction of Apartments, Government buildings, Schools and Colleges, Hospitals, Township, Villas, or Commercial buildings, Kanish Plasters has the best of all- material sourcing, application and quality control services and follow ups.