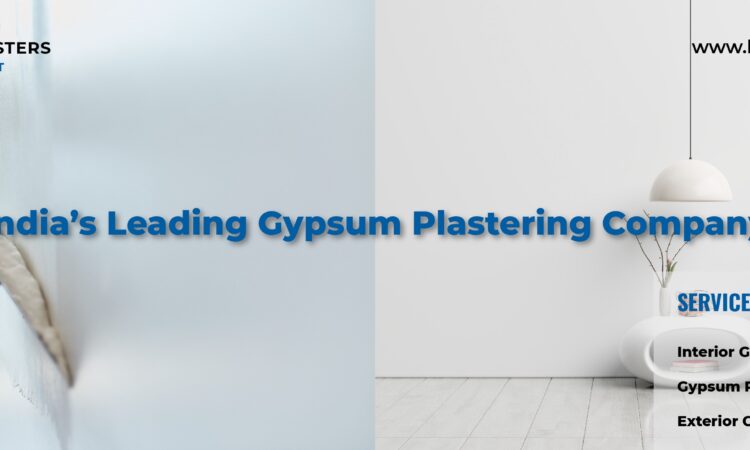 Gypsum is just a soft sulphate mineral made up of calcium sulphate dihydrate (CaSO4:2H20). It is frequently utilized as a fertilised, moulding, sculpting and plaster product. In appearance, gypsum seems to be a white, chalky substance that is surprisingly lightweight for. Crystalline forms of it can be found in nature.

The construction industry has seen a variety of new developments, technological breakthroughs, and application improvements in the last several years, all geared toward accelerating construction and offering better performance. The building industry has utilised gypsum sparingly, despite it being a far ancient substance than concrete as well as sand plaster. Because of its characteristics, Gypsum has emerged as a modern-day miracle product for interior architecture.

In order to make gypsum wall plaster, the element gypsum is partially or completely dehydrated, usually with specific additives or bonding agents added. This is a white cement ingredient.

What is Plaster of Paris?

Plaster of Paris has always been made by crushing warmed gypsum with a level of 150 degrees celsius. Plaster of Paris (POP) turns ordinary gypsum (dihydrate) when water is added, and the resulting substance hardens. Molds for casting may be made using this hardening substance, and it can also be utilised in building.

What is Gypsum Plaster?

Whenever water is added to dried POP dust, it becomes stiff. Gypsum plaster is the name given to the substance used to create a smooth coating on bricks, blocks, or cement.

Prior to finishing, a 6 mm layer of gypsum plaster (also known as Plaster of Paris punning) was typically placed on over of the concrete plaster to provide it a flat finish. It is a 2 step procedure that calls for mixing sand, concrete, plus water on-site. A single layer of fresh gypsum plaster applied directly to the wall is gradually replacing this method. Prepared plaster of Paris (POP) dust is used in gypsum plaster, which is put directly to the wall after being combined with water.

Bricks, hollow or solid cubes, AAC slabs, plus plaster boards may all be plastered using Gypsum Plaster. Plaster made of gypsum is flame or pressure proof, as well as being sound insulating. Gypsum also saves a lot of effort throughout construction because it provides a better polish. Gypsum wall plastering have definitely caught the eye of property developers and constructors to choose gypsum plaster instead of standard cement plaster.

Using Gypsum Plaster Has Many Benefits

Because of its excellent polish plus time-saving properties, architects and builders began to choose gypsum plaster. Gypsum plaster’s benefits include the following:

The drawbacks of using Gypsum Plaster

Exterior walls can’t be plastered with gypsum because it absorbs moisture. Additionally, gypsum plastering can’t be conducted in wet environments such as bathrooms or kitchens.

Gypsum plaster’s curing period and hardness are lowered when exposed to moisture or water. Gypsum, therefore, needs to be carefully kept. Sacks of Gypsum Plaster (POP) must be kept on a raised area (dry floor) constructed of bricks, wood, or cement on the construction site. Gypsum Plaster has a lifespan of 3 to 4 months after it is manufactured. However, if correctly kept, gypsum may be used for up to 6 months, depending on the weather as well as humidity.